I was feeling unsettled about my trip to Cuba even before it was time to step onto the plane a few weeks ago. The inscrutable little island had been near the top of my travel wish list for years. It had originally wormed its way into my consciousness through my reading and the stories of Cuban exiles I knew and admired, particularly my thesis advisor, who is vexed to this day about his native country. Cuba had an aura of impenetrability – both physical and psychological – that made it all the more attractive to me as a travel choice. 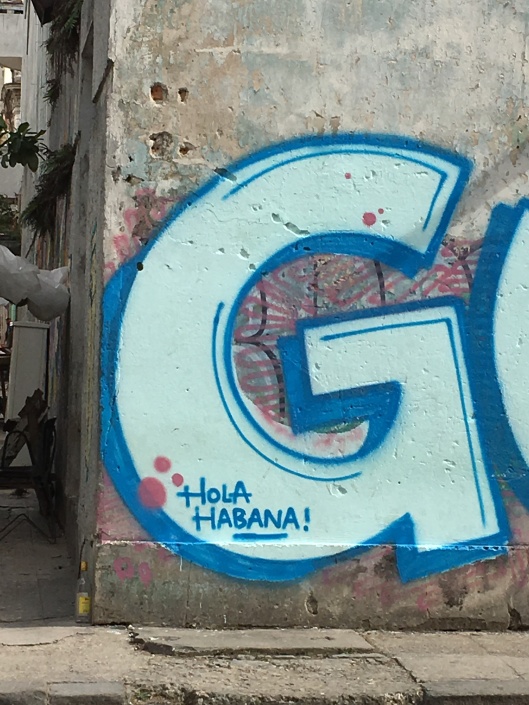 Suddenly, though, Cuba seemed to be everyone’s new destination, and I was feeling peevish about that and my own life situation. Getting in before now had required joining a group, and I balked at paying the exorbitant fees and traveling as part of a package tour, so I stifled my desire and waited. As soon as individual entry was allowed, I jumped to make a plan, but after a Christmas break full of sorting and packing, dumpsters and goodbyes, I was utterly exhausted and cranky going into the trip, so that “plan” was quite vague. Basically, we (my sister and I and each of our daughters) had two cities in mind and a few Airbnbs booked. Luckily, this works just fine in Cuba!

My first surprise was finding Havana light on Americans, but perhaps we avoided them with our choice of accommodations and activities. The throngs of tourists I expected (based on fawning articles, recent Instagram photos, and Facebook posts, all brimming with classic cars and peeling paint) did not materialize in our neighborhood or most places we visited. We spent our first three nights ensconced in a seedy building on a bustling local street, our dingy metal door right next to a window with Fidel’s portrait overseeing a small display of outdated ladies underwear. We loved it!

A second (less thrilling) revelation was the need to stand in lines. I remembered, idiotically, that this was actually still a Communist country, and we started the endless queuing before we even left the airport, spending almost an hour waiting to exchange euros for CUCs. We stood outside state-run establishments, and we warily eyed the disorderly hordes outside the Etecsa offices waiting to buy internet cards.

All the waiting, then buying supplies at shockingly under-stocked stores, and then waiting some more – all with no wifi since we stubbornly resisted the crowds – helped us understand the daily ordeals of the Cuban population even as the new, secondary economy grows almost daily. There are so many signs that change is coming or almost here, yet so many reminders that it really is not. As a traveler, I wondered which one I wanted? And then I wondered which one they wanted.

Those three days exploring Havana were my favorites of the trip. Our apartment in Havana Centro was forbidding on the outside, but very clean and comfortable inside. We were able to walk most places, including the Malecón (which we were lucky to see on the first day as it became inaccessible after a fierce storm on day 2), 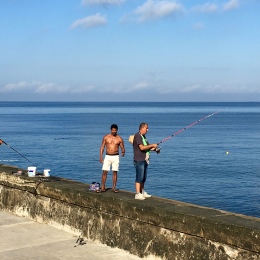 Havana Vieja and all its charming small streets and plazas,

and central Havana (which included the most unique restaurant visit of my life – chronicled here).

View from our Havana Centro apartment

We dined at a classic state-run place that involved over an hour’s line-up outside, made a failed attempt to tour the Partagás cigar factory, and took numerous taxi rides all over the bigger-than-expected city in everything from utilitarian and supremely uncomfortable Russian Ladas to chugging and wheezing 1951 Plymouths or 1948 Buicks with no door handles, seat cushioning, or in one case, windows. 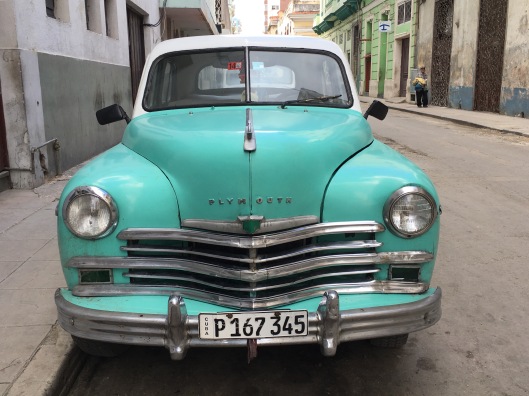 After a foray into the tobacco-growing countryside (future post), we returned to Havana to experience a different part of town. This was to be our splurge – two nights in an old colonial house in what was billed as Havana’s poshest neighborhood. We were giddy with excitement after our humble digs in central Havana and Viñales. We had booked a place that showed white columns, a manicured lawn, a small pool, and huge rooms in the Playa/Miramar area. We pictured ourselves sashaying into Club Havana in cute sundresses and gleefully ogled the few fancy houses we saw from the bus windows on the way back into town.

Expectations are everything, as I’ve cautioned in previous posts, and those cheap places in Havana Centro and rural Viñales exceeded them: Hairdryers! Semi-modern bathrooms! What a deal! About to pay four times as much money, we fantasized about the luxuries we’d get in this fancy house in its stylin’ neighborhood … we would see the pre-revolution lifestyle of wealthy Habaneros up close and personal. 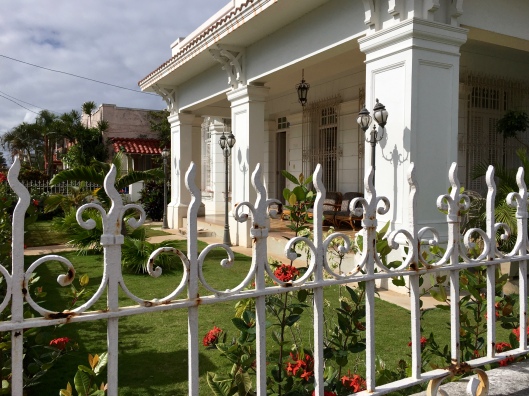 Good from far but far from good

Then we rolled up to the place. The columns looked good from the street, the grass was green, and there were some palm trees, 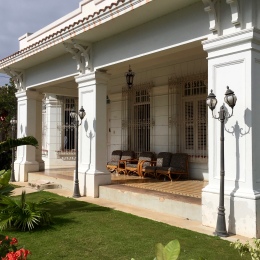 but we entered our grand house to find mildewy rooms, cloyingly heavy decorating, open showers that sprayed the whole bathroom, NO POOL (filled in with concrete per government edict), no hairdryers, truly bizarre art (think wild cats in Shakespearean ruffles), abominable crumbling structures next door, few commercial establishments, and cold, gray, windy weather (the only part not their fault). 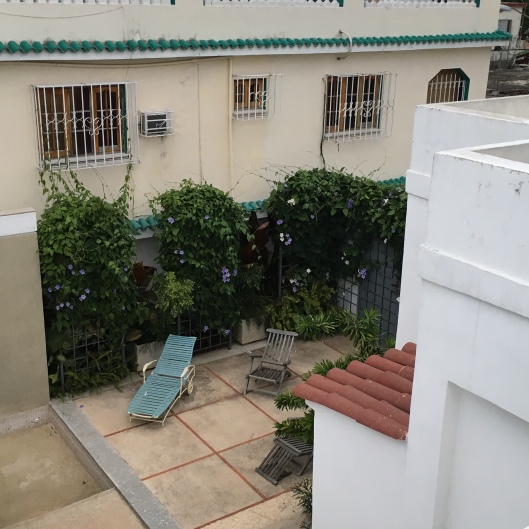 Lounging by the concrete pool

We salvaged the stay, finding another fun state-run outdoor restaurant nearby one night and paying 10 CUCs (US$10) for a day at the beach and pool at Club Havana (which looked nice enough but was eerily empty, with no visitors other than us and a middle-aged Russian lady in a bikini). 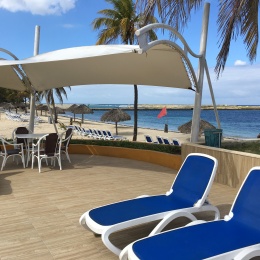 After two piña coladas each, we were finally feeling like the socialites and celebrities who’d hummed along to Frank Sinatra here in the 1940s and ‘50s … until our driver rolled up to fetch us in his rattletrap car and we crammed in and bounced our way back to the casa to the beats of 2017 Cuban hip-hop.

Contrary to some opinions and the fears of those who can’t get to Cuba fast enough, there was little to suggest that this place is going to change inexorably in the coming months. It can be both charming and maddening at the same time, and the quirks that make it that way are not going to be ironed out overnight, for good or for bad. Like one of its famous classical ballerinas, Cuba is turning slowly, carefully, even gracefully, toward its new future – no sudden lurches, no wholesale jumps into a new reality. 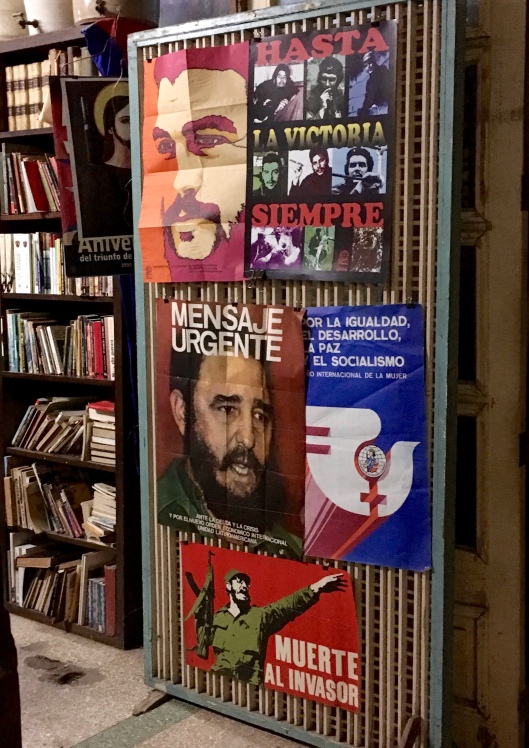 It’s a fascinating place, and when I stopped asking myself why and when, or good or bad, it delivered. I was being a terrible travel snob, I realized, and all those colorful car and fading façade photos that had seemed like overblown clichés before I went were authentic representations of Cuban life today. As my daughter said one afternoon as we snapped our 17,000th photo of a classic car against a crumbling building, “This just never gets old, does it?” 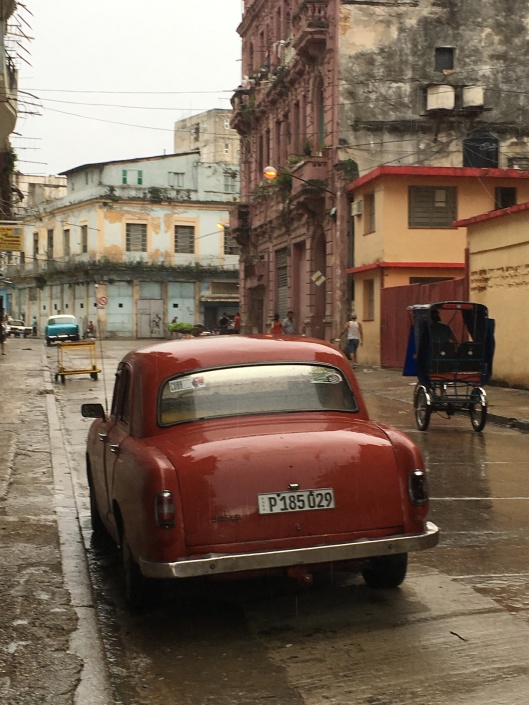 82 thoughts on “A Graceful Turn to the Future”