When we build a house in most of the world, we start with a permanent foundation and frame the structure from there on up, and we hope and expect that our home will exist in that spot for years to come. In much of rural Mongolia, there is some beautiful house framing going on, but the resulting structure – a ger (often known as a yurt in other languages) – is a fully collapsible and movable one that has been used for thousands of years. 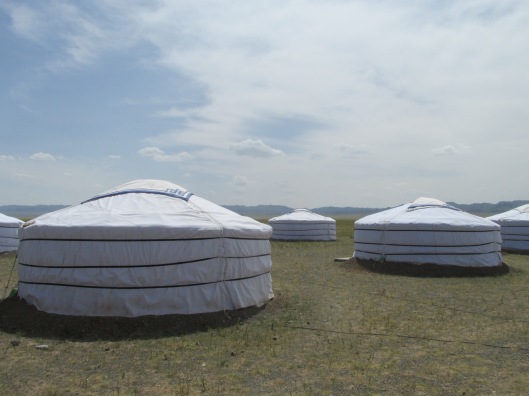 I’ve spent a good amount of time in tents the world over, and I expected a fairly similar abode when I went to Mongolia last month. I was in for a striking surprise in several respects. For one, gers are quite large and sturdy. Gers are sized in terms of the number of expandable panels, and a typical ger for a family might be a 6-panel affair. Each panel is an accordion-like grid of lightweight wood strips that folds up into a bundle that can be loaded onto a camel (or these days, sometimes a pick-up truck) for transport to the next season’s pastureland. 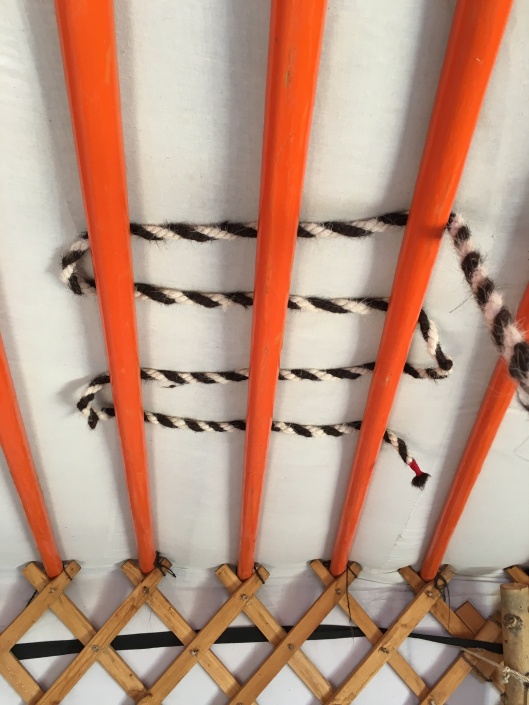 Between each lattice-work panel is a post, and the panels and posts are lashed together with leather or rope ties. Between the front two panels is a wood doorframe and heavy wood door. 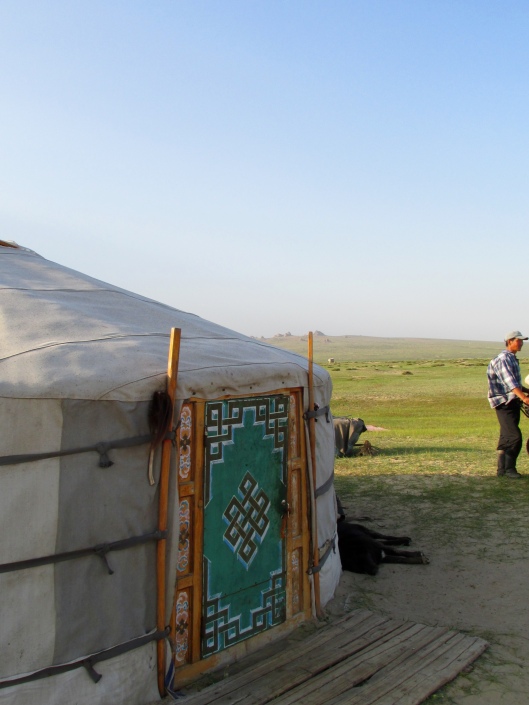 In a ger of this size, there are usually at least three couches or beds that serve in those capacities, respectively, during daytime and night. One side of the ger is used for food preparation, and other sections have traditionally been designated for men, women, children, and guests. In the center of the ger is a wood-burning stove whose chimney rises through a hole in the tent’s ceiling.

My second surprise was how complex and stunning those ceiling designs were, in both the gers for tourists and those of the nomadic families.  An open circle, or crown, at the top of the tent has a series of radiating poles – a gorgeous geometric array of orange or red painted rafters – that settle onto the side panels. This roof is often self-supporting, but in larger gers, it may sit on the support posts between the side panels. The crown is partially open for the stovepipe and for air circulation, but it can be covered with a canvas tarp that usually lies over the roof for extra protection.

The entire structure is covered with felt, usually made from sheep or goat wool from the family’s animals. This material insulates the ger in both hot and cold weather and is often wrapped again in a canvas covering that is more water- and sunproof. The entire tent is held together by long ropes tied horizontally around the dwelling. 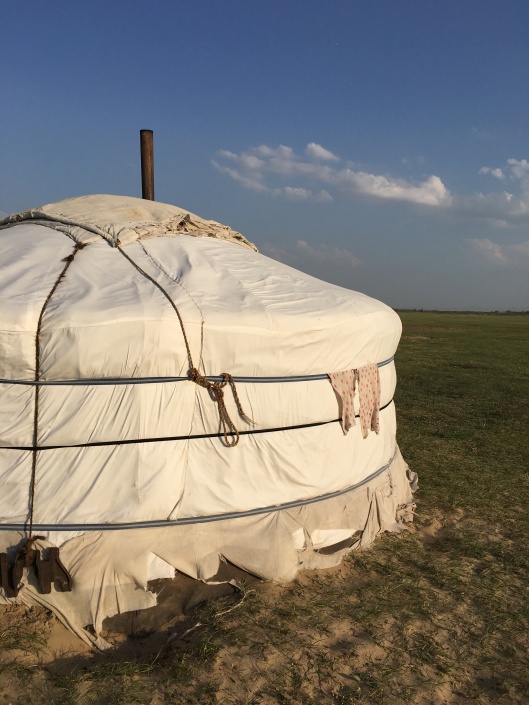 (As a fun aside, we visited the Mongolian version of Costco one day to gather supplies outside Ulaanbaatar, and what should we find in the back of the store but a generic ger! Like most things in a big box store, this one was plain and characterless.)

Gers are round in order to redirect the fierce winds on the open steppe. Their circular shape helps them resist gusts from any direction, which is critical in a place with no natural windbreaks like trees or tall grasses and shrubs, and their rounded tops protect the roof from being ripped off. 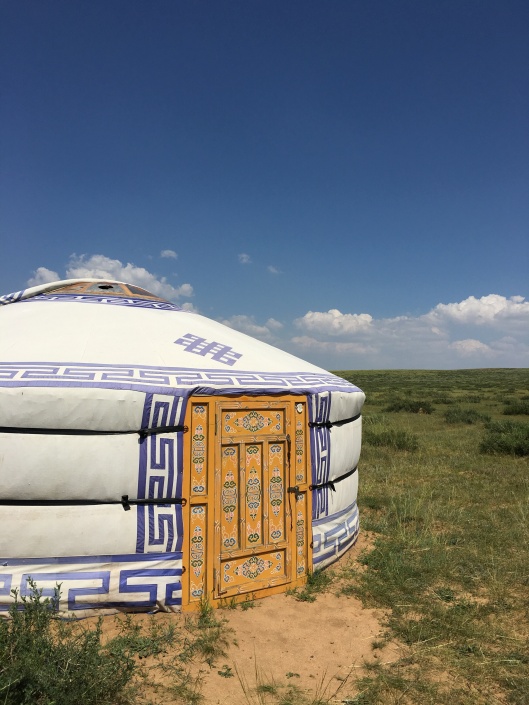 A nomadic family can disassemble and reassemble a ger in an hour or two, and most family-sized gers can be transported on two or three camels. We were lucky to see one camel loaded up with long poles as the summer grazing season was coming to an end during our trip.

We were even luckier to spend half of our nights in Mongolia in these aesthetically pleasing and comfortable tents. I loved tucking my modern belongings into the lattice-work walls that have characterized these gers for centuries. I slept like a baby with my crown view of the stars and my door open to the sweeping grasslands (in spite of a hungry visitor one night – a vole? – who ate my snacks right out of my backpack, and a toad that hopped in one night after it was too dark to find him to scoot him out). We visited a number of families on the steppe and in the Gobi Desert, sitting around their stoves and enjoying their unmatched hospitality in their cheerful gers.

I think a good quarter of my photos are of gers – gers at sunrise, gers in the distance, gers on a glowing evening, and gers with their charming owners – and I’m sure one of those remembrances will end up in a frame of its own on my wall one of these days!

Part of a series of posts on my trip to Mongolia in August 2016. Other posts can be found here:

68 thoughts on “Framing a House (Mongolian-Style)”